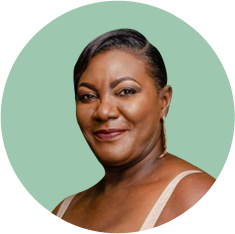 Born and raised on the beautiful island of Matthew Town, Inagua, Lovern was married to the late William Wildgoose.  Lovern Wildgoose is a widow of 20 years and a proud mother of three wonderful children, Thomas, Trevor and Tiffany.  She enjoys travelling, cooking, entertaining, gardening and watching action movies.

The giving of her time, an effort unselfishly, to help others brings her great joy and contentment. She has had the most awe-inspiring task of being a part of the Cancer Society of The Bahamas for the past 20 years. Lovern served in a number of capacities, including Board Member, Vice President, President 20132017, Member of the Stride For Life Walk Committee, Annual Ball Committee Co‐Chair, Chairperson of the Big Cal’s Bumping Circus, assisted with Patient Support Group meetings, Bingo and Raffle Committee, Organizer/Chairperson for the Annual Pap Smear & PSA Campaign, Caterer to countless society functions along with other civil duties.

In July 2004 Mrs. Wildgoose had the honor of chaperoning two cancer stricken boys on a two week Cancer Camp in Rochester, New York. Then in August of the same year the Cancer Society held its first camp adventure at the Adventure Learning Center in Nassau. Lovern was able to cater to nine kids who had cancer, by cooking their favorite foods. During her presidency, the Cancer society of The Bahamas was able to pull off its first National Telethon.

As one who loves to serve others, she has also given up her time in other aspects of her life. As an usher at the Wesley Methodist Church, Balliou Hill Road, a long time volunteer with the Ministry of Tourism’s People‐to‐People Program, served as Treasurer for the New Providence Women’s Basketball Association, Team Manager for the Bahamas National Basketball Federation, as well as chaperoned for Temple Christian School’s junior and senior girls basketball teams.

Employed at Nassau Paper company from 1977‐1983, and later joined the Bahamas Government Ministry of Finance Data Processing Center in 1983. She then under secondment, was sent to the Commissioner’s Office in Fresh Creek, Andros for two years, and then onto the Public Treasury until her retirement in August of 2016. Lovern Wildgoose was the proud recipient of the Treasury’s first Employee of the Year Award in 2003.  In 2011 she also received the Cancer Society Susan Andrews Award.