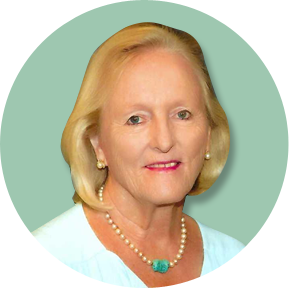 Susan Kathleen Ley was born in Bristol, England at the start of WW II. She received her early Education there and at the age 17, upon graduating, she was selected to be a UK Representative for the Commonwealth Youth Movement who were travelling to celebrate the Founding of the First British Colony in North America, in Jamestown, Virginia. There she met Mr. Noel Sawyer Roberts, representing The Bahamas and in November 1963 they got married and moved to The Bahamas.

Susan Roberts volunteered for years with the Yellow Birds; a Volunteer Group at the Princess Margaret Hospital (founded after the Yarmouth Castle Disaster) and in 1976 Dr. John Lunn asked Susan to form a Cancer Society in The Bahamas.

Susan has received several Service Club Awards; the Mother of the Year Award from the Bahamas Mothers Club, the Golden Heart Award, Bahamas Silver Jubilee Award and the M.B.E from Her Majesty Queen Elizabeth. And for the Bahamas, the Point of Light Award, as a Member of the Commonwealth. However her greatest pleasure comes from serving on the Board of the Cancer Society of The Bahamas since 1976 and hopes to continue to volunteer and see the Society grow, as long as she is able.