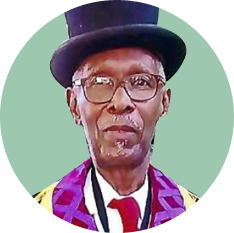 Mr. Barry apprenticeship includes working at the following: Wireless Telegraph and Telephone Communication and Weather Observation in Meteorology, Out Island Commissioner/Magistrate certified by Sr. Moses Ichabob Hepburn. In 1964 Brother Barry was elected Senior Member of Board of Works, Town Planning Committee and Board of Pilotage.

After resigning from Telecommunications in December, 1969, he migrated to New Providence, and was employed with International Air Bahama in the Commissary Dept. The following year, July, 1970, he was promoted to Passenger Service Supervisor and then Airport Manager.

In 1999, he joined the Cancer Society of The Bahamas as a Member and in 2005 became a Director of the Board. The Founding Secretary of the Us TOO Bahamas Chapter, Prostate Cancer Education and Support.

2013 was a year of achievements for Mr. Barry, he received several awards such as: Honoree of St. George’s Anglican Church Guild to Help the Sick and Needy and the recipient of the Cancer Society of The Bahamas Lifetime Achievement Award, followed by the recipient of the Centennial Life Member Award, Bahamas Girl Guides Association on October 18th 2014.